From camels to lemurs, Dr. Bobby Schopler is enthralled by exotic animals – and plays a mean harmonica, too. 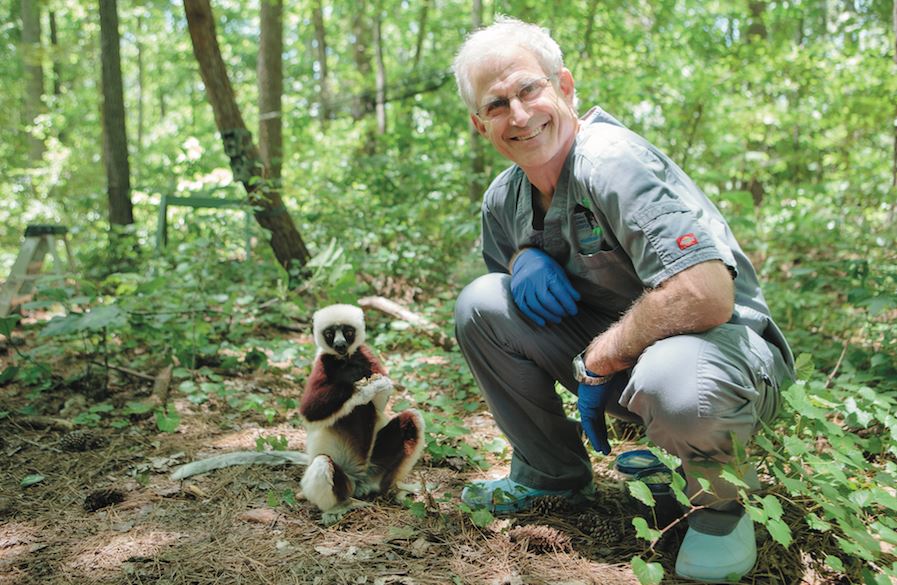 Celebrating its 50th anniversary this year, the Duke Lemur Center (DLC) has an impressive number of lemurs; in fact, it’s the largest assemblage of lemurs outside of their native Madagascar. With these animals facing extinction, DLC plays an important role in conservation efforts and continually works to raise awareness about the need to protect these incredible primates.

It takes a devoted team to care for the more than 200 animals at the center, and one person who plays an enormous role in their care is staff veterinarian Dr. Bobby Schopler. After veterinary school, Dr. Schopler decided to concentrate on wildlife medicine, which has long been his passion. “I spent my childhood exploring in the woods looking for wild animals,” he says. His adventurous spirit led him to Ethiopia, where he spent a year working on a research project involving camels. Back in the U.S., he recognized the need for an area wildlife hospital and founded Piedmont Wildlife Center in 2002. In 2005, he left the wildlife center to join DLC and has since dedicated himself to the lemurs.

What’s involved in a typical day of work?

There are a wide variety of needs and medical issues. There aren’t books about lemurs, so a lot of what we do is interpreted from dog and cat, or human, medicine. It’s somewhere in between. We learn as we go and are constantly improving. We have about 230 animals and do physical exams every other year on each one; about 115 per year are done under anesthesia. About half my work are routine exams and half is dealing with diseases or problems. Or babies being born. We have the whole circle of life.

Why do you think people are so interested in lemurs?

They’re really cute; they’re fuzzy. There is something very endearing about them. They look at you very intently. We’re related distantly. We’re both primates. I think the more related you are to something – mentally, physically or genetically – the more attention there is.

Talk a little about your involvement with conservation efforts regarding lemurs.

They’re the most endangered group of mammals into the world, and they all come from Madagascar. That island has limits, and the human population is growing at a startling rate. It’s one of the poorest countries. This makes them a threatened group of animals. Duke Lemur Center has a great program in Madagascar where they have some research stations and teach conservation to the local population. One of the research stations is at a national wildlife preserve. Illegal poaching occurs, but our researchers there have incorporated people from Madagascar and gotten them on board with protecting their valuable resource [the lemur]. I’ve been five times on various research trips. We teach people who to increase sustainable food sources in order to grow food better, so they are not forced into eating lemurs.

You also spent a year in Ethiopia working with camels. Could you explain how you got involved in that project?

When I graduated veterinary school, I applied to any job I could find in Africa. I got a job at the University of Asmara teaching physiology and parasitology. While there, I got involved with some research on sleeping sickness in camels. The disease is transmitted by tsetse flies normally, but Ethiopia and Eritrea have none of those flies. The question I wanted to answer was, ‘How much of the disease was in our area, and how was it transmitted?’ The answer proved challenging, as there was a civil war raging [in 1987/88, when Eritrea and Ethiopia were one country]. I offered the camel drivers a free diagnostic exam for their camels and treatment for this debilitating disease if they tested positive. Seemed like a generous offer to me, but to the camel drivers I was a foreigner and not to be trusted. Many would not let me touch their camels much less get a few drops of blood for diagnosis. Even so, I was able to get enough samples to see that about 3% of them were positive. The camels carried heavy loads of commercial goods from Djibouti. … They also carried heavy loads of ticks and though we did not actually prove it, the evidence suggested that ticks were transmitting the disease. The study ended prematurely, [as] Asmara was being bombed, and my pregnant wife and I were airlifted out of the country.

You’re a musician and have played in a band for years. Does that translate over to your work at all?

Growing up, I played piano and clarinet, and then later the harmonica. I also played in the school band. [In my band,] Too Much Fun, I’m the lead singer in about a quarter of the songs and sing backup on the rest. The music we play is reminiscent of the ’50s, ’60s and ’70s. But no Beatles or “Free Bird.” Our music is about half original and half cover. I love music and find it to be a universal language. It crosses cultures. I bring my harmonica when I go into the field. … Music helps to bridge cultures and generations, and it starts friendships.

The Duke Lemur Center relies on the generous support of donors like you to help fulfill its conservation efforts in Madagascar to protect and save wild lemurs. Planned giving can provide critical support either for a specific area or need or unrestricted to support the Lemur Center as a whole. If you would like to learn more about supporting the future of the Lemur Center, please contact Duke’s Office of Gift Planning.

This Blueprints blog post is a reprint with the expressed permission of the original author. This article was originally posted on Durham Magazine website.

For the love of lemurs: Barbara Parkening establishes endowment to support the Duke Lemur Center

It’s an instantly humbling conversation when a donor reaches out to you to share that they are making plans to provide a substantial gift after they pass away, naming us as a beneficiary in any way or as a recipient of part of their estate. Of all the places and worthy causes in this world, […]

On campus at Duke: Lemur born via rare C-section

On April 12th, the veterinary team at the Duke Lemur Center (DLC) welcomed the newest addition to their blue-eyed black lemur population via a rare–and risky–caesarean section. Ranomasina is considered one of the most significant births that the DLC has seen in recent years because she is the offspring of one of the rarest lemur […]

Of all Jeannette Rinehart’s many interests, her most cherished pastime involves learning anything and everything about lemurs. Rinehart graduated from Duke University in 1951 and received a bachelor of arts in sociology. She moved to Hagerstown, Maryland, before the Duke Lemur Center opened in 1966. “The Duke Lemur Center was not there when I was […]