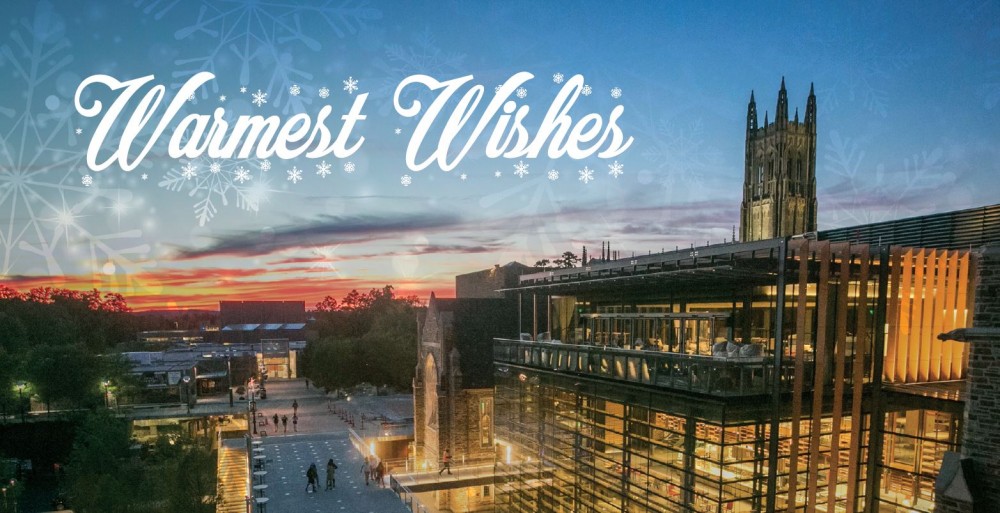 Warmest wishes to you and yours this holiday season! Thank you for your continued support of Duke!

Sincerely,
Your friends in Duke’s Office of Gift Planning

About the image:
During the Duke Forward campaign, Duke’s West Union underwent its first major transformation since it was built in 1931. West Union served as the principal student gathering and eating space for more than 50 years, until the opening of the Bryan Center in 1982. The $90 million renovation was funded primarily from an $80 million gift from The Duke Endowment, the largest single philanthropic gift to Duke in the university’s history. The new 112,000-square-foot renovation features 13 eateries by local community vendors, collaboration spaces and meeting rooms, a teaching kitchen, and The Commons upscale dining restaurant.

As we close 2021 and look ahead to the new year, we take this time to reflect on just a few of the many Duke University achievements over the past twelve months that were made possible by your steadfast support, encouragement, and generosity. U.S. News & World Report ranked Duke 9th among U.S. universities. In […]

We’re grateful for you.

During this particularly challenging year, we are humbled by the continued strength and generosity of the Duke community. As the holidays approach, there’s no better time to express our sincere thanks and appreciation for all that you do for the university. We wish you and your family good health and happiness this holiday season and […]

Holiday wishes from the Office of Gift Planning

The holiday season brings thoughts of joy and gratitude, and there’s no better time to express our thanks and sincere appreciation for all that you do for Duke. Happy holidays! — Your friends in the Office of Gift Planning

As the year comes to a close, we are humbled by your generosity and continued support for Duke. We wish you and your loved ones a joyous holiday and a very happy new year. Your friends at Duke’s Office of Gift Planning