An unconventional path to a rewarding career 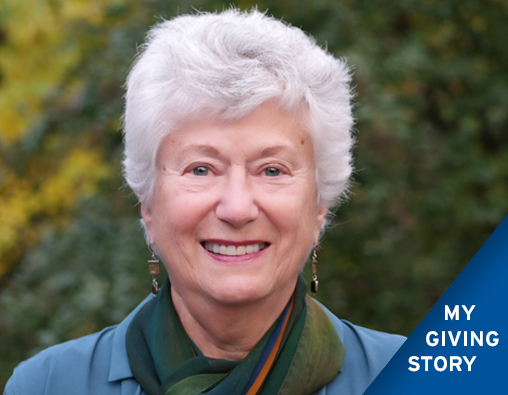 Don’t let anyone say work shouldn’t define you. Sometimes it can be a lifeline.

In the early 1980s, life was good for Judith Ruderman Ph.D.’76, with two preteen children and her husband, Bob HS’74, a Duke orthopedic surgeon. Her Duke career was off to a promising start as a program developer in Duke’s continuing education office.

Then, on Valentine’s Day 1982, Bob died suddenly of heart failure. He was 40 years old.

Judith was shattered. After years of working to send her husband through medical school, raising young children, and finally completing her own doctoral program in English, it seemed that everything was running smoothly. Now, Bob was gone. Her co-workers immediately enveloped her in support.

The next year, Judith served as interim director for six months, and Duke’s then-president Keith Brodie asked her to take over continuing education permanently. In the aftermath of her husband’s passing, this transition made all the difference, helping her to not just survive but thrive. Several factors carried Ruderman through the most difficult years of her life: the additional income from running continuing education and the summer session, the satisfaction of teaching literature seminars as adjunct faculty in English, and the unwavering support of her colleagues and friends.

After 12 years as director of continuing education and university summer programs, in 1995 Ruderman was named vice provost for academic and administrative services. She stayed in that position for another 14 years before retiring in 2009. She still teaches one literature seminar each year and is scheduled to publish her fifth book, “Passing Fancies in Jewish American Literature and Culture,” in January 2019.

Her planned gift to Duke will fund two causes dear to her heart. A portion is designated for the Robert J. Ruderman Myelodysplasia Fund, which was established by Orthopedics after his death in his memory. Another portion will help support the programming priorities of Jewish Life at Duke.

“Of course I would want to honor Bob by designating part of my gift to orthopedic surgery,” she said. “He was such a wonderful pediatric orthopedic surgeon, helping so many children, especially those with spina bifida.

“As for Jewish Life at Duke, I was honored to be a part of the very first stirrings toward a Jewish Center. I contributed my own money, time and energy because I wanted to see a robust site for discussion and debate, for learning and worship, for intragroup community and interfaith/interracial relations.”

Ruderman’s gift continues the work that both she and her husband loved, and at the same time pays back Duke for that lifeline she received all those years ago when she needed it most.

Why did you decide to attend Duke for your Ph.D.?

I had always wanted to go for my doctorate, but first I worked as a high school teacher to put my husband through medical school. Bob began his residency in orthopedic surgery at Duke in 1972. With two small children, and a fellowship from the Danforth Foundation Fellowship for Women that paid for child care along with tuition and fees, I was ready to attend graduate school.

Describe your first day on campus.

1972 is a very long time ago! But I remember very clearly that in my very first class — metaphysical poetry with professor George Williams — I met another graduate student, Susan Dyer, who to this day is one of my very best friends. Isn’t that a nice thing to say about my first day in class?

It was a mixed bag. Even with paid child care, parenting wasn’t easy because my husband, the surgical resident, was never home. He was operating six days a week and seeing patients on the seventh. It was very difficult trying to be a good parent and a good student.

These days, it is common for women to go to graduate school after a delay of some years. But in the early ’70s, it was not. That said, I loved my courses and professors. The intellectual excitement, challenges and camaraderie were just what I’d wanted.

How did your Duke education influence your career and/or your life?

When I finished the doctorate in 1976 the job market for humanities Ph.D.s had closed down. I was not willing to lead the life of a “gypsy scholar” because my children were only 6 and 8 years old then, and Bob was the one resident asked to stay on the staff in orthopaedic surgery. His hours were just as rigorous then, as a faculty member. So, I began to teach non-credit courses through both Duke and Durham County’s continuing education programs. Thanks to Jean O’Barr, then-director of continuing education at Duke, I found a home in that office.

When an opening came up in the provost’s office, I applied for it and got it. My writing skills, honed in my doctoral program, helped me get the job as vice provost. I served happily, with a variety of responsibilities in my portfolio, until my retirement. I have been teaching one seminar a year since 1989, in either D.H. Lawrence (my specialty) or Jewish-American literature and culture (which I made a specialty). And I have been able to publish four books of literary/cultural criticism, with a fifth in the wings.

So in spite of the fact that I never had a mainstream faculty position at Duke, I have happily functioned successfully as a researcher, writer, teacher and administrator. That last role got me the University Medal for Distinguished Meritorious Service at Duke in 2012, and in July 2017 my research and writing earned me the Harry T. Moore Award for lifetime contributions to D.H. Lawrence Studies. But I am just as gratified when students tell me they have gotten something out of my courses.

Why is giving back to Jewish Life at Duke important to you?

In part to enliven and enrich our Duke community as a whole. Giving back also and importantly helps to strengthen the Jewish people. We’ve lasted so long in the face of annihilation and assimilation, not to mention prejudice and stereotyping, and our people have contributed so much to the world. Giving back is the least we can do to honor our ancestors and provide for our descendants.

As the late novelist Walker Percy, a Catholic, once wrote (and I paraphrase), “Isn’t it amazing that you can walk down the street in any city in the United States and you will never see a Hittite or Amalekite but you can always find a Jew?” I want Duke to continue to “always find a Jew!”

Greg’s work includes publications, proposals, reports, collateral materials and web content. He joined University Development in July 2012 after a stint with Duke Medicine Marketing & Creative Services. Before that, Greg worked as editor of Wildlife in North Carolina magazine, and spent more than a decade as a sportswriter covering everything from Little League to ACC basketball. A North Carolina native and lifelong resident, he holds a BA in journalism from UNC-Chapel Hill and lives in Durham with his wonderful wife and two young sons.