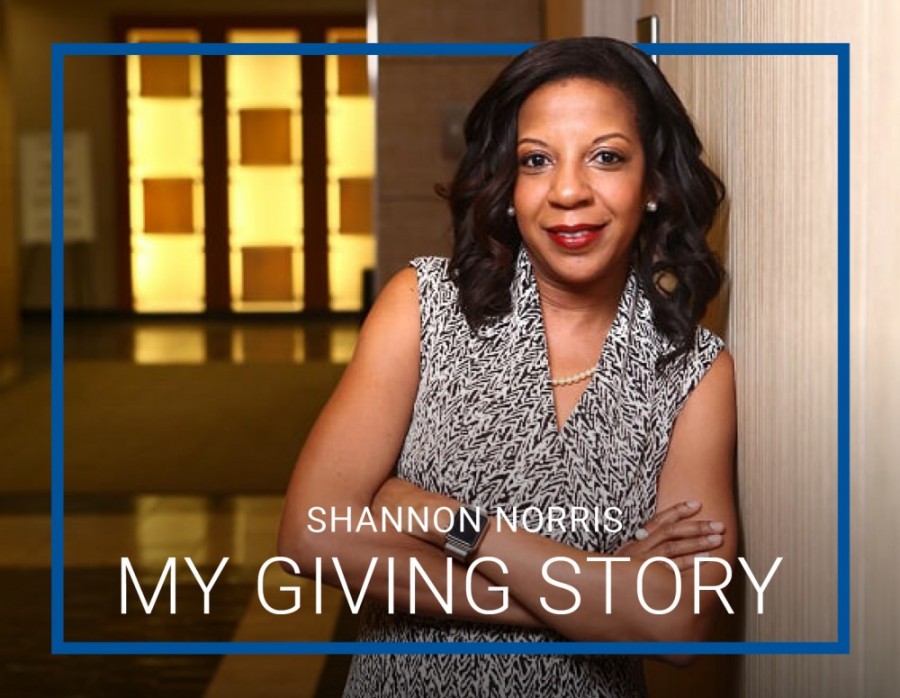 If you grew up in a military family or know how often those in the military move, you’ll understand how Shannon Denise Norris ’93, M.D.’97 came to view the world as a child — and later what that meant for her in choosing a university and a career.

Shannon’s father became an airman in the United States Air Force after high school and soon married Shannon’s mother. Her parents were young, and with the world ahead of them, they wanted to leave Greenville, South Carolina, where they were born and raised.

Due to the transient nature of the military, moving service members and their families to a new station of duty every few years, Shannon was born in California. The family then moved back to South Carolina to live while her father was deployed to Iran for a year. Then, just before Shannon entered kindergarten, the family moved yet again when Shannon’s father was stationed at Dover Air Force Base in Delaware.

This constant state of moving becomes a balance between wanting never to move again and a sort of restlessness from not having moved recently enough. But, her father remained at Dover for 11 years — an unusually long time to stay at a single military installation.

“I really had a normal childhood in Dover,” Shannon says. “We lived on base but I wasn’t moving around as a kid like other military children.”

But that wasn’t the last transition for the family. In the middle of 10th grade, Shannon’s father retired. Her parents decided to make one final move to return to South Carolina where Shannon’s grandparents were aging.

“It was pretty traumatic to move to South Carolina where I didn’t have any friends,” says Shannon. “It felt very different to me.”

She was able to attend the same school for her junior and senior years. There, she poured herself into her studies, taking the most rigorous courses and extracurricular activities she could to pursue a goal she had set for herself in elementary school amidst all those moves: Shannon was going to become a physician.

In her senior year, Shannon started taking trips to tour college campuses, including some premier Southern schools. In Delaware, she had thought that universities in Boston and New York were the ultimate destinations on her path to becoming a doctor. Plus, her best friend in Dover had promised Shannon they would meet back up in college at Princeton.

As a first-generation student, Shannon’s counselors urged her to consider a place like Duke. She had been to Duke’s campus once before, but Shannon gained the clarity she needed when she returned for the Black Student Alliance Invitational Weekend.

“I never thought about coming to school in the South,” she says. “I toured colleges in Atlanta, and then Duke. Duke brought me back for Black student weekend — that was when I said, ‘This is where I’m going.’”

Shannon was offered the Reginaldo Howard Memorial Scholarship, a merit-based scholarship, and her Duke financial aid package was better than Princeton’s offering. This, combined with the phenomenal people she met during her weekend at Duke — including her future roommate — sealed the deal. Coincidentally, her friend from Dover ended up at MIT, not Princeton.

Her time as a first-year student was an adjustment, but the friendships Shannon made carried her through her Duke experience. She finally didn’t have to move, and many of those friends became family. It was a social blossoming, opening Shannon’s eyes to so much more.

“Whenever I talk about Duke, I always talk about the people,” says Shannon. “My friends and my sorority — and just how opening the experience was.”

ROOTED IN THE CITY OF MEDICINE

Even with the incredible experience Shannon had, she was restless to move again after earning her bachelor’s degree from Trinity College of Arts & Sciences.

“Honestly, I did want to leave Duke for medical school, not because I wanted to leave the campus or the experience, but I wanted to see something different,” she says. “I wanted to see another city outside of Raleigh-Durham-Chapel Hill.”

Her plan was to go somewhere for medical school and come back as a house staff member at Duke Hospital. Then, she could settle down in the Triangle in her career and grow a family here. This time Shannon’s sights were set on Penn Med.

“I got my acceptance letter and financial package to UPenn; I was going to UPenn,” Shannon says. “Then Duke came with their offer.”

It was graduation weekend and Shannon’s parents were in Durham. She opened the letter from Duke University School of Medicine and received the Dean’s Tuition Scholarship, a full ride. “I could not turn that down. It was the best decision I ever made.”

At the School of Medicine, one of the things that struck Shannon about the medical education she received was how physicians were about handling business efficiently and getting things done. “We always had our white coats on,” she says. “There’s such an etiquette and professionalism at Duke.”

Dressing the part and putting her best foot forward well prepared Shannon for the challenging work ahead. “Duke drilled into me what it means to be a doctor. It’s not only about how you look, but it’s a mindset that you carry.”

In her third year, Shannon found a passion for research. She says that the critical thinking and research skills she developed at Duke helped her continually think outside of the box to seek answers to questions that have yet to be solved in medicine. Overall, Shannon says her medical education prepared her to be a physician on the highest level — to take care of patients, even during a trying time such as the COVID-19 pandemic.

After Duke, Shannon began her medical residency debt-free to chart her course as a radiologist, and she was soon offered a wonderful opportunity to join a radiology team at Emory University in Atlanta. Two of her friends from her Duke residency were also joining the group. It was the fruition of years of hard work at Duke and many years before that dreaming of becoming a doctor.

A GIFT THAT MOVES OTHERS FORWARD

After residency, Shannon took out her first mortgage and bought a house; she was able to make decisions for herself and her family that were not driven financially because that pressure had been lifted. Shannon knew she wanted others to have the same opportunity she had.

So, after having children, Shannon started thinking about the legacy she wanted to leave and how best to give back. She started by taking medical mission trips to Haiti. Even though she was working with patients now in private practice, taking a hands-on approach to medicine in the field reminded her why she became a doctor in the first place — and came full circle back to Duke.

“The reason I’m here and can be so successful is because of Duke,” Shannon says. “That’s what started my desire to give back.”