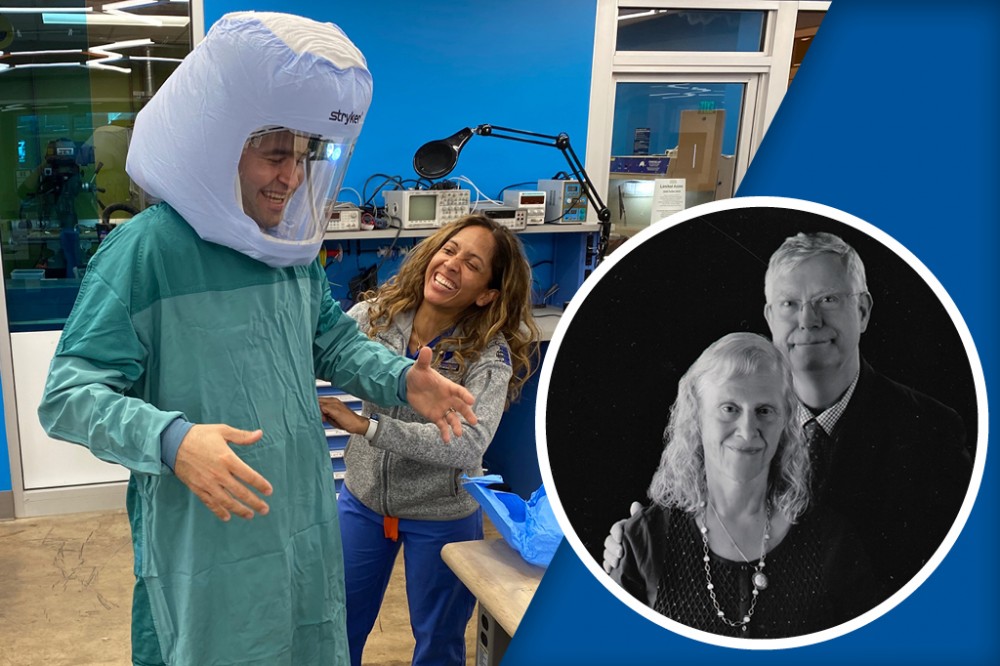 At the time, freshmen were given upperclassmen as advisors. Mark, a sophomore on a Navy ROTC scholarship, happened to be dating one of the advisors in Diane’s dorm, the Graduate Center. Diane and Mark also shared an English class together during that first semester.

As luck would have it, although Diane was a freshman and Mark was a year ahead, Diane placed out of first-year English. It would be the only time the curriculum between them intersected, as Diane was in nursing school and Mark was an engineering student. Diane started as a student at the Woman’s College but transferred to the School of Nursing in the second half of her sophomore year. In class and during social events, they quickly became friends.

Still, they didn’t get a chance to see if there was anything more to the friendship until senior year.

“We started dating with an interest in seeing if there was something more significant there, and obviously there was,” says Diane.

Fast forward through the wonderful lives they’ve led and now Diane and Mark have a daughter, Kimberly Gail Davis McCraw B.S.N.’12, who is also a Duke graduate, and a son, Kevin Stanley Davis.

Kevin went to NC State University, where he received a bachelor’s degree in English in 2008. Kimberly first went to the University of North Carolina at Chapel Hill, receiving a bachelor’s degree in public relations and economics. Five years into her career, she decided she wanted to follow in her mother’s footsteps and share her lifelong passion of helping patients. This brought Kimberly to Duke for the accelerated baccalaureate degree that the School of Nursing offers.

Back to the Future at Duke

“I was at the Engineering School, and right after that I went into the Navy,” says Mark. “I went into nuclear power. The first thing we did was six months of very intensive nuclear engineering training. I found it very easy, because even though the specific skills weren’t exactly applicable, the general education that I had gotten at Duke was invaluable.”

In between graduating from Duke in 1973 and having their daughter join them as a Duke alum, Diane and Mark had wonderful careers that took them many spectacular places.

Mark advanced with his career in the Navy, eventually leading the Davises to be stationed at a submarine base in New London, Connecticut. While there, Diane pursued an advanced clinical degree, a master’s in nursing from UConn.

In the first semester she was at UConn, Diane took a course outside of nursing from the graduate school in biobehavioral sciences. The course had a particular focus on infancy, which Diane greatly enjoyed because of her interest in babies. By semester’s end, the professor had convinced Diane to get a Ph.D.

“I knew I was interested in research, but I had never considered being a Ph.D.,” says Diane.

She finished her degree in developmental psychobiology. Next, Diane wanted to find a place where she could join the faculty. At the same time, Mark was exiting the Navy and looking to get a degree in computer science for his second career. This led the Davises back to the Triangle area, with Diane teaching at the University of North Carolina School of Nursing, where she eventually became a Kenan Distinguished Professor of Nursing and director of Carolina’s doctoral and post-doctoral programs in nursing. After 20 years working at one of the top nursing schools in the country, Diane was ready for new challenges.

Diane knew the dean of the Duke University School of Nursing, Dr. Mary T. Champagne, from her time at UNC when Champagne was an assistant professor. Soon, Diane moved to Duke to help with Duke’s new doctoral program in nursing.

Around this time, Mark was building a second successful career at IBM. Even though he had received his Ph.D. from a different school, he continued to collaborate with Duke on critical research.

Diane also took over as associate dean for research, staying in that position until her retirement at Duke University School of Nursing in 2015, where she is now honored as the Marcus E. Hobbs Professor Emitera.

Like many faithful Blue Devils, the Davises feel they owe quite a lot to Duke. So much so that in recent years they’ve decided to make Duke the beneficiary of their individual retirement accounts (IRAs).

The Davises worked on their planned gift to Duke fairly early on. When they originally created their will, Duke was included, but the Davises’ attorney recommended an update due to recent changes in tax laws. They decided to name Duke the beneficiary of their individual retirement account (IRA) assets to avoid probate, which can lengthen the timeframe for beneficiaries to receive access to assets.

“In fact, what we have done during this revision of our will is move as much of the things as we can to limit the probate,” Mark says. This way their daughter, who is the executor of their will, won’t have to deal with too many affairs of the estate left in their passing.

It was also important to the Davises that they accomplish important family goals with philanthropy.

“As Christians, there is a certain amount of charity we should do. It’s part of our obligations in life,” says Mark. “We know that when we give money to Duke, they are going to do the things we think are important to do.”

Knowing the university well through their personal and professional relationships over decades of close partnership, the Davises feel they have a mutual understanding of the pressing priorities at the Duke University School of Nursing and the Pratt School of Engineering.

“In all of our time with Duke,” says Mark, “we’ve understood where the needs are and what good we can do with them.”

This gift comes in addition to a wonderful gift from the Davises in March 2019, which established the Holditch-Davis Family Ph.D. Student Research Fund, to benefit Ph.D. students at the School of Nursing. No one better understands nursing’s unique look at research — which helps people understand and cope with diseases — and the financial challenges doctoral students face than Diane.

“Duke is very generous to its doctoral students. They’re all fully funded, but fully funded means tuition and fees. It doesn’t apply to research costs,” says Diane. “I watched a number of students struggle with how they were going to pay for their research. It can be a barrier to doing the research they really want to do.”

With the generosity of talented and dedicated alumni like Diane and Mark Davis, the School of Nursing and Pratt School of Engineering will continue to have their pressing needs met and always be among the very best of Duke.