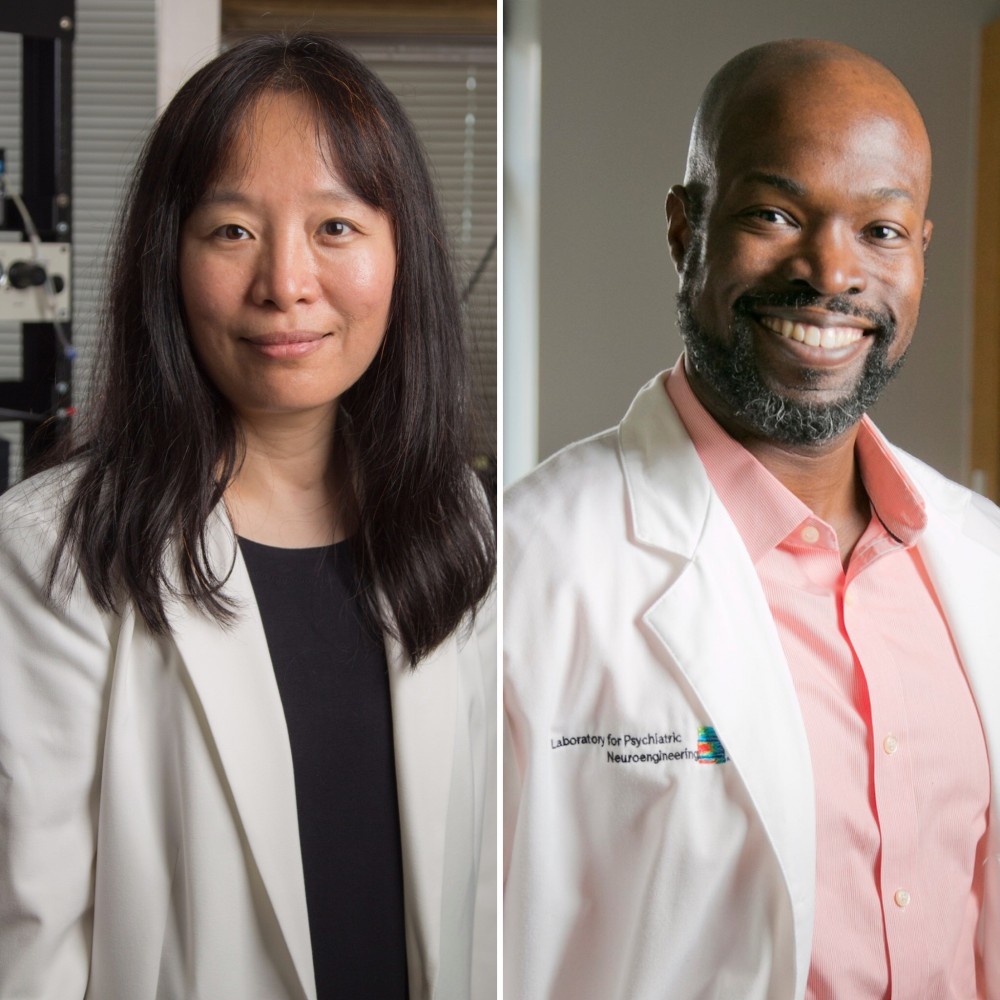 DURHAM, N.C. — Two Duke University brain researchers who want to solve the long-standing puzzle of human consciousness have been awarded a $1 million grant by the W. M. Keck Foundation.

Their study, “Unraveling the Neural Gate to Consciousness,” will pair the neurobiology labs of associate professor Fan Wang and assistant professor Kafui Dzirasa as they attempt to find the specific circuits in the brain that govern the conscious and unconscious states.

“We are grateful for the Keck Foundation’s support of this ambitious research goal,” said President Richard H. Brodhead. “With this vital support, Duke faculty can work to discover the biological mechanisms that undergird our consciousness — producing insights that have the potential to expand the frontiers of science and medicine.”

Focusing on a family of cells identified as the anesthesia-affected neurons, or AANs, the two labs will trace cellular activity chemically and electrically to create maps of the neural networks. Once those specific circuits are identified, the researchers will attempt to determine whether instilling specific patterns of neural activity across multiple brain regions can sustain conscious perception in the anesthesia-induced unconscious state in mice.

Wang, who has appointments in neurobiology and cell biology, is known for her work using novel molecular methods and chemical signals to identify and precisely map sensory and motor neural circuits in the brains of mice.

“We each bring particular expertise, methodologies and scientific perspectives that, used in collaboration, will be very powerful,” said Dzirasa, a physician-scientist who has pioneered tools to understand and record brain activity.

Earlier this year, Dzirasa won a presidential early career science and engineering award from President Barack Obama. In the collaboration with Wang, he will use engineered probes to electrically measure specific circuits in the brain and light-based stimulation methods to manipulate them.

Both researchers are also members of the Duke Institute for Brain Sciences.

“Consciousness has long puzzled scientists and philosophers, and Dr. Wang and Dr. Dzirasa’s pioneering research has the potential to transform how we understand both consciousness and our shared human experience,” said A. Eugene Washington, M.D., chancellor for health affairs at Duke and president and CEO of the Duke University Health System. “I look forward to their pursuit of this great unanswered question in science, and I am thankful for the W. M. Keck Foundation’s investment in their work.”

Based in Los Angeles, the W. M. Keck Foundation was established in 1954 by the late W. M. Keck, founder of the Superior Oil Company. The foundation’s grant making is focused primarily on pioneering efforts in the areas of medical, science and engineering research. The foundation also maintains an undergraduate education program that promotes distinctive learning and research experiences for students in the sciences and in the liberal arts, and a Southern California Grant Program that provides support for the Los Angeles community, with a special emphasis on children and youth from low-income families, special needs populations and safety-net services.