Duke Creative Writing Is on the Rise 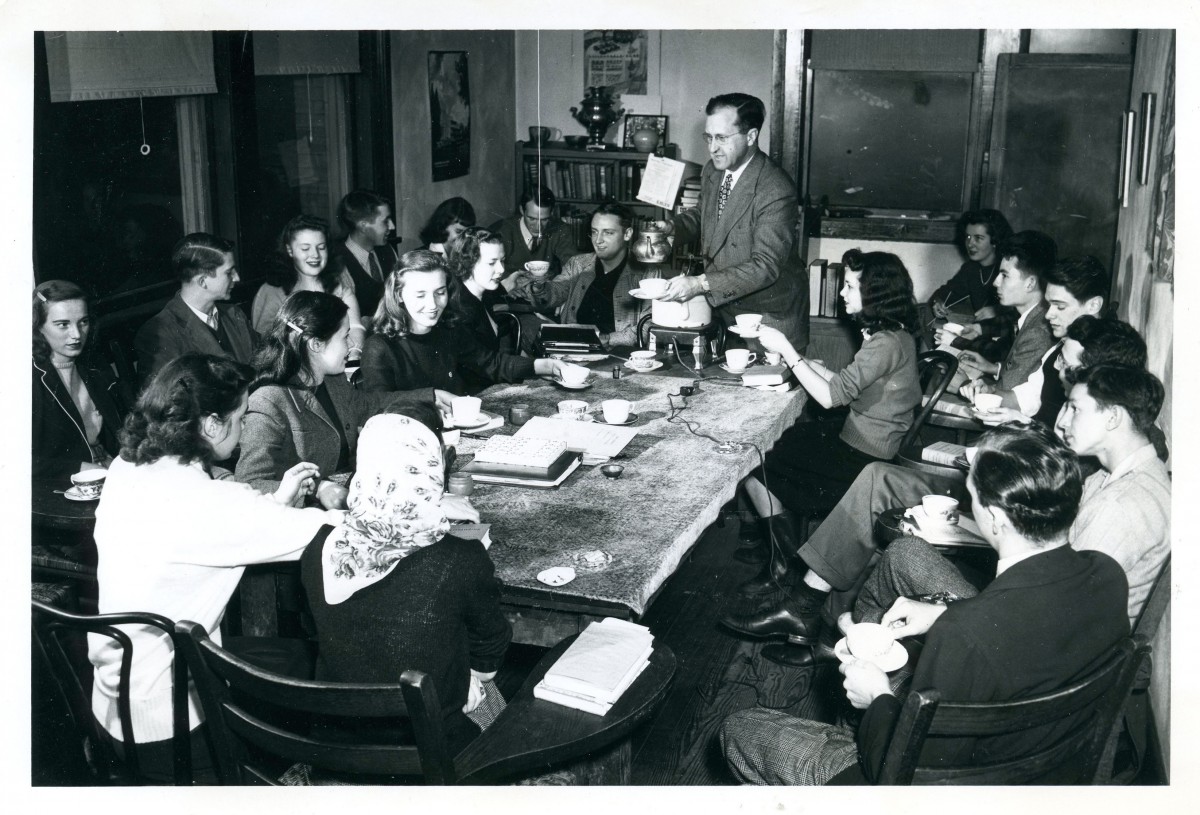 For undergraduates interested in creative writing, the halls of the English department in the Allen Building come with a few history lessons. Award-winning writers such as William Styron ’47, Hon.’68; Anne Tyler ’61; James Applewhite ’58, A.M.’60, Ph.D.’69; Fred Chappell ’61, A.M.’64; and Reynolds Price ’55 first developed their penchant for the page as Duke students.

One lesser known detail about all of these supreme wielders of language is that they studied under the tutelage (or with the disciples) of William Blackburn, legendary Duke English professor emeritus. His legacy at Duke still burns brightly today.

Blackburn came to Duke by way of Oxford University on a Rhodes Scholarship in Duke’s earliest days, which alumnae Elizabeth Schoenfeld ’84 covered in a Duke Magazine piece on writing, Blackburn’s contributions to the discipline and home as a place for creative inspiration.

In this case, Blackburn’s home was located just a stone’s throw from West Campus. He even taught classes and held writerly gatherings there. As a teacher of writing, he gave students a home to hang their creative hats. His classrooms were a sanctuary where students could play out their fictional worlds in real-time in workshops among peers.

“There had been an editorial in the London Times Literary Supplement on the difficulty of teaching creative writing,” Schoenfeld says. “It singled Blackburn out as one of the rare individuals who could.” 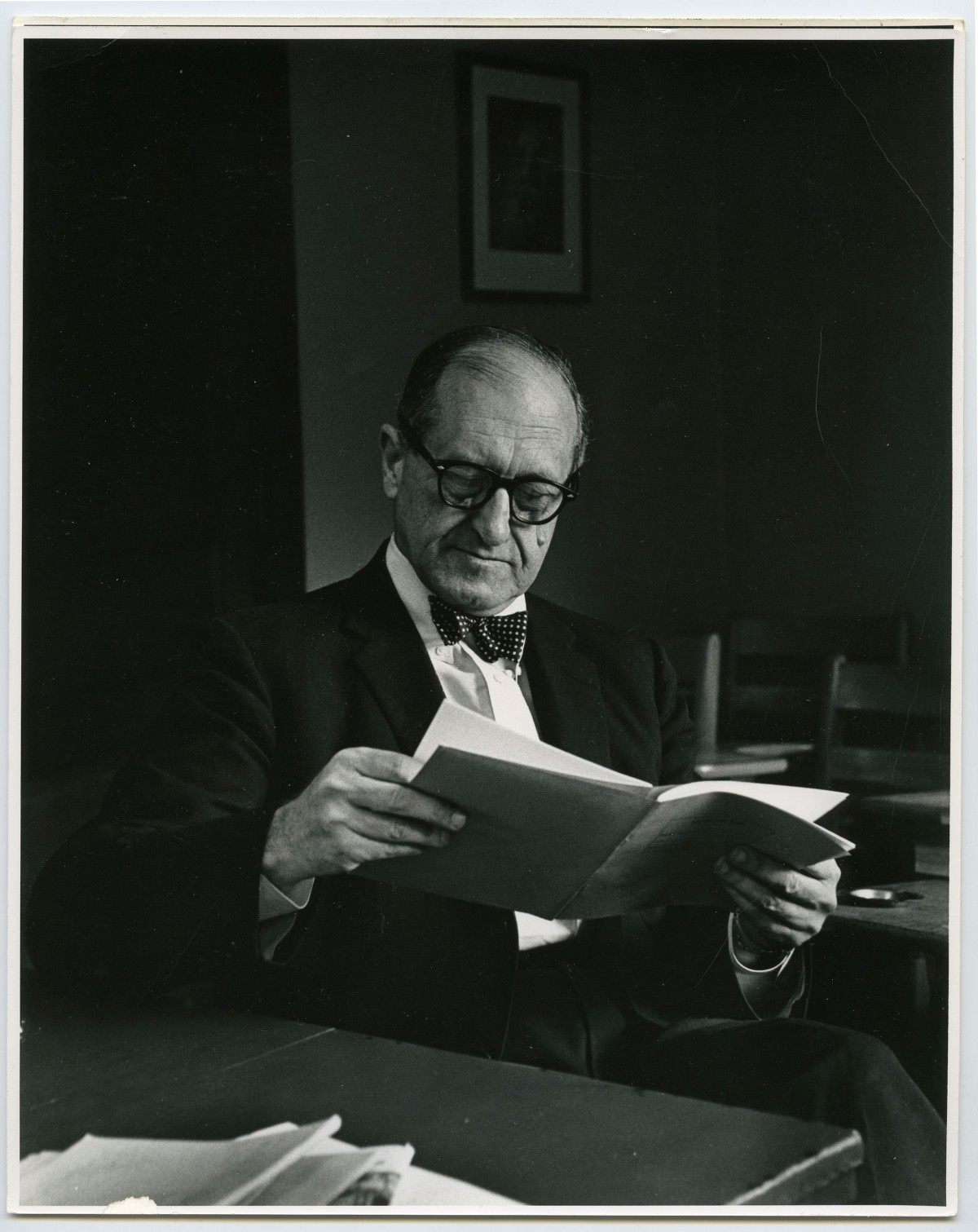 Blackburn expected his student writers to read. He shepherded them through the trial of the workshop, an unforgiving landscape for young writers, but also a vital, rewarding experience. As a custodian to their art, Blackburn read with the writer in mind: What were they trying to accomplish? What was working well? What could be improved upon? What was unique about this writer’s talents?

Students read and edited these early stories of their peers through a lens of empathy, with literature and critical theory sharing space on the bookshelf. As a result, their collective craft improved, as did their artistic bravery.

Bringing Together Writers From Around the World

Today, Blackburn’s name can be found attached to the annual Blackburn Literary Festival (some years known as the Archive Literary Festival). It’s an event which draws some of the finest writers in the world to Duke and Durham to celebrate the craft of writing. Literary voices such as Joyce Carol Oates, Toni Morrison, Eudora Welty, Margaret Atwood, Don DeLillo — a pantheon of great storytellers, novelists and poets — come to share their work with the writing community in readings, conversations, and workshops that have inspired generations of Duke students and young writers. 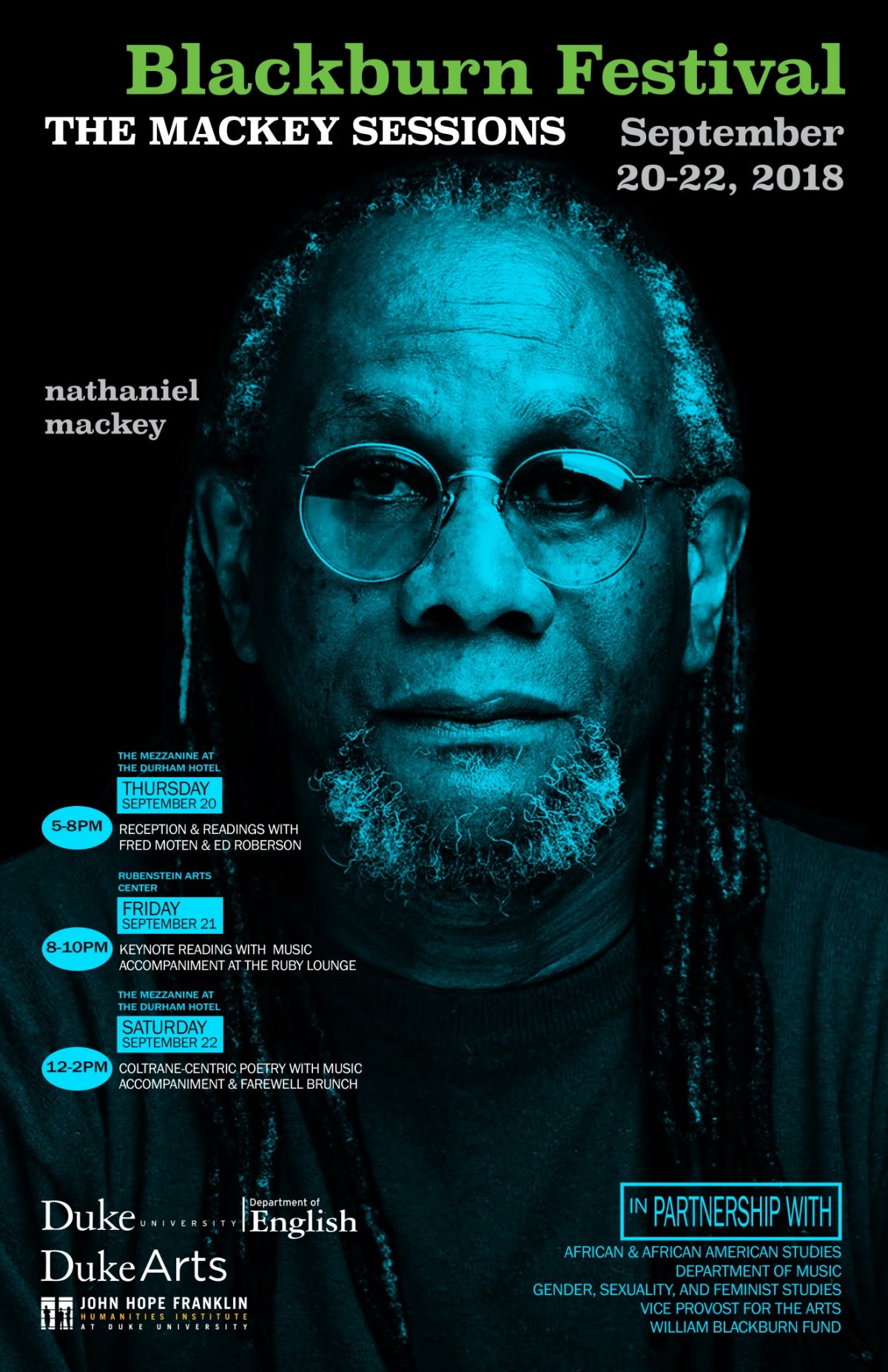 “The Mackey Sessions” poster from the Blackburn Festival, 2018. Photo courtesy of Duke University Department of English.

In 2018, the festival saw treasured poet Nathaniel Mackey, Reynolds Price Professor of Creative Writing at Duke, as the headliner in “The Mackey Sessions,” a three-day fusion of poetry and jazz that concluded at the Rubenstein Arts Center. Promotional posters for the event paid homage to classic Blue Note jazz album covers — and the event came as advertised. Mackey’s reading from his epic poem, “Song of the Andoumboulou,” whose title comes from a funeral song in West Africa, featured musical accompaniment. “The Mackey Sessions” engaged the greater arts community in song and spoken word.

In Mackey’s introduction before the keynote reading, he talked about the influence jazz has had on poetry and John Coltrane, born just a few hours south of Durham, in Hamlet, North Carolina. By the time Mackey finished reading, it felt as though time had stopped. Members of the audience were transported through his visions to somewhere altogether new, and back again.

The performance was magical and intentionally deliberate. This slowing effect created by reading longform poetry like “Song of Andoumboulou” creates what Mackey calls “fugitive time” by forcing us away from time observed in our active, everyday lives, into time outside of ourselves. This evening honoring Mackey laid bare the trial of the human experience in a way that few will forget.

Carrying on the Tradition of Creative Writing

Home is an important concept for artists and writers. Longing for home, or defining home, is a quintessential question of literature today. Much as the journey away from home was centuries before.

This year’s Blackburn Festival featured readings from new and cherished members of Duke’s Department of English, including faculty members Faulkner Fox, JP Gritton, Melissa Malouf and Mesha Maren, and staff member Michelle Dove. A second evening included readings from visiting writers Amit Chaudhuri and Caryl Phillips, both of whom are revered across the globe for their fiction. The festival was sponsored by the English department, Franklin Humanities Institute (FHI), Duke Arts and the Rubenstein Arts Center.

Each writer approached place differently, making keen observations on the value of narrative in a world with shifting conversations on the arts and humanities.

The opening night was held downtown at the Durham Hotel. The six writers presented fictional worlds that were vastly different from one another, yet the importance of “place” was something all of the stories shared. Each writer approached place differently, making keen observations on the value of narrative in a world with shifting conversations on the arts and humanities.

For Gritton and Maren, it was an introduction to the larger creative writing community here. Both were recently appointed assistant professors of the practice at Duke, and they each read from their acclaimed recently published novels: “Wyoming” and “Sugar Run,” respectively.

“Events like the Blackburn Festival send a powerful message,” Gritton says. “Not just to English majors or their teachers, but to that student who may be pre-med or pre-law with a passion for writing. Such students might eventually move on to Silicon Valley or med school, but in the meantime they have this amazing novel or story idea they want to pursue.”

“It’s amazing knowing that there are people who feel committed to financially back an event that directly supports writers at Duke,” Maren says. “In general, the willingness to put funding behind something like this is hard to sum into words. It’s important for my students to see that writing is valued. And it makes me glad to be in this community.” 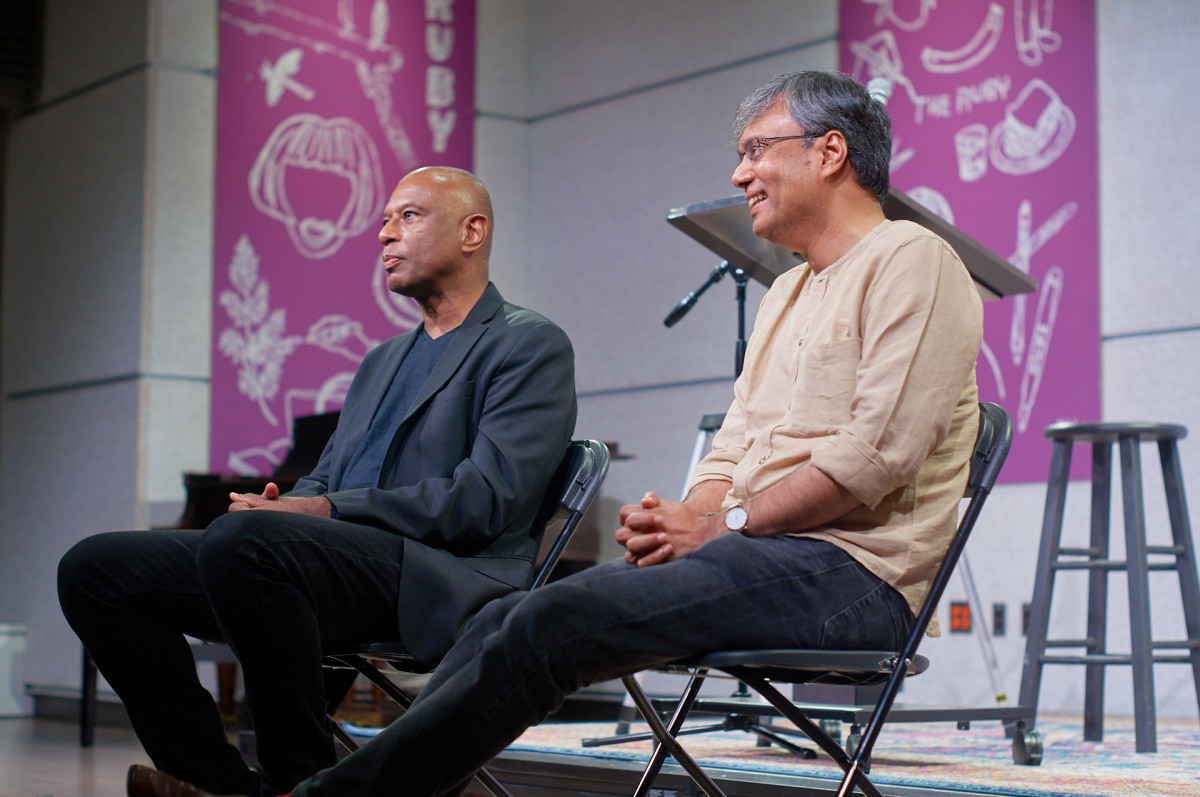 In the second evening in the Ruby Lounge at the Rubenstein Arts Center, the Blackburn festival brought visiting writers Amit Chaudhuri and Caryl Phillips together for the first time. They had been following one another’s work for some time — even communicating via email for many months — but had never met before. Duke, and in particular this event, made it possible.

At the podium, each explored “home” as a concept by reading from their latest works. Phillips shared an excerpt from his novel “A View of the Empire at Sunset,” which explores the life of Caribbean novelist and migrant Jean Rhys. Chaudhuri read from “Friend of My Youth,” a work of ultrafiction about a writer who shares the same name as him and encounters an at-times unrecognizable Bombay, India. The complexities of home in a world of ratcheting climate change and other political, socioeconomic and cultural realities provided the audience with much food for thought.

After reading, the audience engaged with both writers in an intimate Q&A, getting a rare glimpse into their creative processes. Phillips will return in spring 2020 for a short-term residency at Duke. Chaudhuri spent a full week at Duke as he participated in FHI’s World Arts Series and Ruby Fridays.

On Chaudhuri and his work, FHI Director Ranjana Khanna adds this: “Professor Chaudhuri has gained recognition in many fields — whether composing, writing journalism, fiction, poetry or criticism. He consistently experiments with form and provides an astute critical lens on academic writing, contemporary issues, and the possibilities and impossibilities of cultural fusion.”

Caroline Waring, a senior and an A.B. Duke Scholar, is majoring in global cultural studies and minoring in English and creative writing. She came to Duke from a small city in eastern Washington. Living in Durham has given her an appreciation for writing about places and settings that are relatively intimate while offering endless realms of possibilities.

“The thing about literary criticism is that you’re trying to draw out a theory or conclusion from a text or a way of reading,” Waring says. “Whereas with creative writing, you can implicitly broach questions, but you never have to state your intentions out loud. You can give yourself more freedom.”

Studying creative writing at Duke has opened her eyes to pursuing both an M.F.A. in creative writing and a Ph.D. in English after graduation. She’s also had the opportunity to work with The Archive, the student-run journal that publishes the best writing by Duke undergraduates.

“Working at The Archive has been helpful in thinking and speaking about other people’s writing. You also gain experience editorializing other peoples’ works. It’s different than a workshop because the author is not in the room,” says Waring.

The opportunities found at Duke between literature, critical theory, and creative writing courses and co-curricular programming offer a unique cross-blend of pathways for prospective writers and for those passing through the discipline.

In speaking with Waring, one thing is clear. The opportunities found at Duke between literature, critical theory, and creative writing courses and co-curricular programming offer a unique cross-blend of pathways for prospective writers and for those passing through the discipline. There’s tremendous value for those seeking to enhance their communication skills, dig into Duke’s broader arts community and strengthen their emotional intelligence.

Blackburn and the writers at Duke who have come after him have built a unique program for writing. Whether creating imagined places as real as our own — or drawing home in new light that reflects our changing world — where we live and learn will continue to define not only our lives but the words we leave behind.

To sustain and improve creative writing and its associated programs at Duke, endowed and expendable funds are necessary. Give to the English department to help ensure the next generation of writers thrive from their time at Duke to long afterward as writers, editors, teachers, critics and versatile humanists.
TAGS: Student Experience