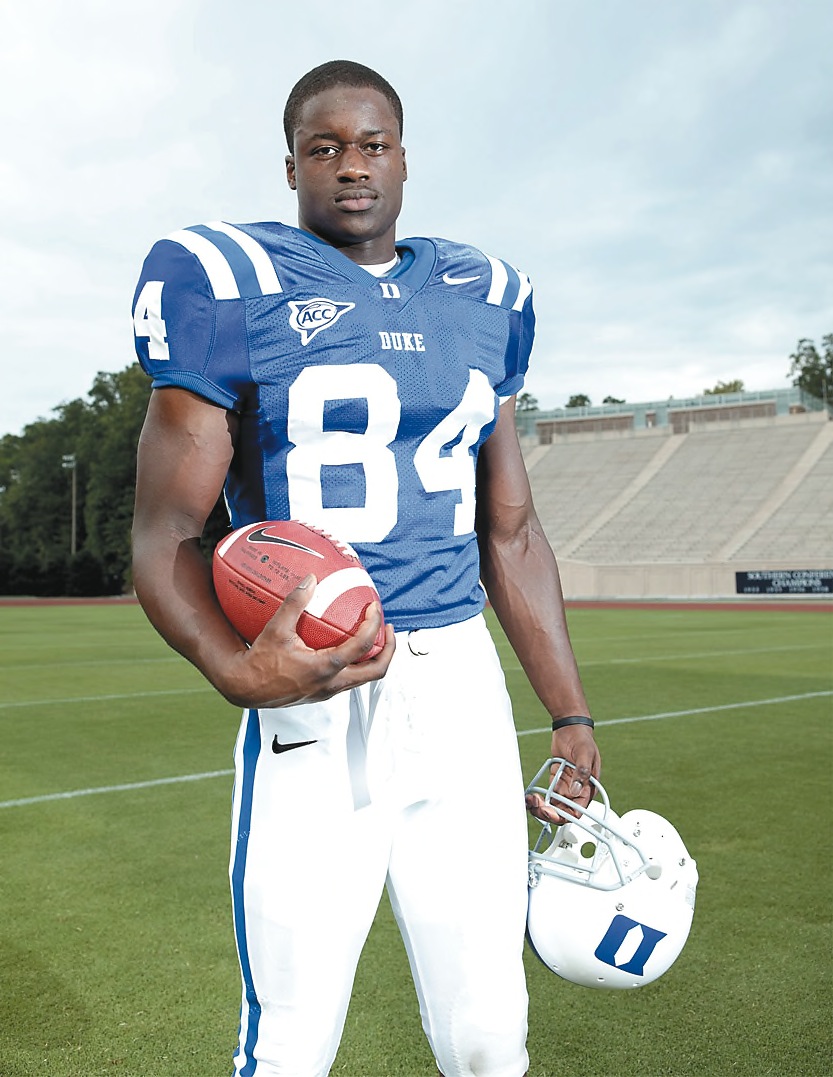 Kenny Anunike received his undergraduate degree in biological anthropology and anatomy in December 2012. A native of Galena, Ohio, Kenny was an All-ACC honorable mention defensive end for the Blue Devils in 2012, recording 42 tackles and five quarterback sacks, and helping Duke reach the Belk Bowl—its first bowl game since 1995. He was poised for a breakthrough in 2011, leading the ACC in tackles for loss and quarterback sacks through four games when he tore an anterior cruciate ligament, which sidelined him for the rest of the year. The NCAA granted Anunike a sixth year of eligibility last March, and he will suit up for the Blue Devils for a final season this fall while pursuing a Master of Arts in Liberal Studies (MALS) at Duke’s Graduate School. Anunike has twice been named to the Dean’s List, and he earned a spot on the ACC Honor Roll four times in his undergraduate career.

Kenny, along with Duke volleyball’s Nailah Waterfield ’13 and Duke women’s tennis’ Mallory Cecil ’13, is appearing on a What’s Right with College Athletics? panel at Duke Forward in Atlanta on February 2. The Atlanta gathering is the first of an extraordinary series of events celebrating the launch of the Duke Forward campaign and what it means for the university’s future. Learn more about ways the campaign will enrich the Duke experience at dukeforward.duke.edu.

What has been your favorite class at Duke?
Since I’m a biological anthropology and anatomy major, I was able to take Dr. Claude Moorman’s class “The Anatomy of the Lower Extremities.” Each group of 5 to 6 people got to dissect a cadaver leg. For the whole semester, we took tests on it and learned about bones, muscles, and the function of those muscles along with their attachment sites, innervations, and blood passages. The funny thing is that Dr. Moorman actually performed all of my surgeries here at Duke.

Also, why did you choose Duke?
I chose Duke because my Dad really loved Duke, but I also saw that Coach Cutliffe had a very good tenure at the University of Tennessee and Ole Miss and he was coming to Duke. He kept saying this was the dawn of a new day and that he had a vision to make this program that was at the bottom of the barrel a major contender in the ACC. Instead of going to one of the major Big Ten or ACC programs, I decided I wanted to adopt that same vision and help to be a part of making history. I wanted to be a part of helping to build something from the bottom all the way to the top to become a true ACC contender, which we have done now. We’re not finished yet, but we definitely did something that hasn’t been done here in a very long time and that was to go to the Belk Bowl. I played a part in that and I’m finally getting to see a dream realized. This is really almost like a dream come true. I wouldn’t trade a minute of the time that I’ve spent at Duke—and that I’m going to continue to spend here—to be at any other school.

Sports have always been a part of your life. How do you think being a student-athlete will influence your life after graduation?
I think that ultimately my experience here will help to propel my life after football, because of the lessons I’ve learned and the skill set I’ve been able to obtain from playing football. Everything that we’ve learned to do on the field can apply to almost any job. Time management, being able to work under pressure, being able to accept criticism, and still be able to perform and do the job or task at hand is really important. Working with others, cooperating with people on a team, cooperating with people in the workforce— you’re all there striving to obtain a certain goal.