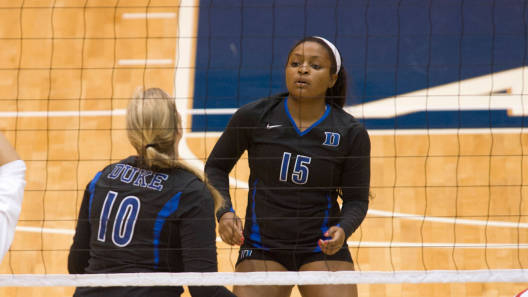 Nailah Waterfield ’13 is a senior psychology and African-American studies major from Long Beach, California. A two-year captain for the Duke women’s volleyball team, she totaled 175 digs in 2012 for a 2.43 digs per set average, her highest in her four seasons as a Blue Devil. She is also an Alice M. Baldwin Scholar who was named to the ACC Academic Honor Roll in each of her first three seasons.

Nailah, along with Duke Football’s Kenny Anunike ’12, A.M. ’16 and Duke Women’s Tennis’ Mallory Cecil ’13, will appear on a What’s Right with College Athletics panel at Duke Forward in Atlanta on February 2. The Atlanta gathering is the first of an extraordinary series of events celebrating the launch of the Duke Forward campaign and what it means for the university’s future. Learn more about ways the campaign will enrich the Duke experience at dukeforward.duke.edu.

This winter will be your last season as a Blue Devil. As you look back, what’s been the most surprising thing about playing volleyball at Duke?
The most surprising thing here is how much support there is among the athletic community. It’s just so surprising how you can go to any given game and there will be support. For example, when you go to a girls’ soccer game, the men’s basketball team is there. When you go to our games, you see the men’s lacrosse team. Athletes who play fall sports like going out to see the tennis team play in the spring. Student athletes have mutual respect for each other despite coming from so many different backgrounds and so many different regions. Everyone has this common feeling of respecting the commitment that we all have and the work that we all put in.

Are there skills that translate from the court to the classroom? How has volleyball helped you in other areas of your life?
There wasn’t a time since I started playing volleyball that I joined a team where I had never played with a single person before. So coming into Duke never having played with any of the girls, never having played against any of the girls, never really having seen anyone play—it really is like putting together a puzzle. The team atmosphere of all working together to solve a problem is so incredibly applicable to the classroom…and to the workforce.

What has been your favorite class at Duke?
I took one course last year called the “Role of Race & Culture on Development.” It was the only course at Duke that is cross-listed between my two majors, which are Psychology and African American Studies. The professor, Makeba Wilbourn, is actually from my hometown of Long Beach, California…It was the first time I’ve gotten to take a course with her, and she’s brilliant. It was really cool for my worlds to intertwine like that. That’s what Duke does. Whatever you want—however detailed or niched your passions are—Duke will find a space for it.

What would you tell next year’s class of incoming student athletes?
Never forget what a privilege it is. When it gets tough, when you’re tired, when working out is too hard and when classes are adding up, you have to take a step back and remember what an unbelievable privilege we’ve been given to be at this university, to be receiving an education, to be playing the sport that we love. The second thing I would say is to milk it! People at Duke have worked hard to make it the perfect institution, and from studying abroad to going to performances, to seeing your friends compete, there are so many ways to make your four years incredibly memorable.

Sports have always been a part of your life. How do you think being a student athlete will influence your life after graduation?
I definitely think I’ll never drop my competitive side. It’s something that’s going to stick with me for a long time. Catching up with retired athletes, past players—they’ve still got that. I think that my love for my university as a student athlete has just been extremely strong, and I think I’ll have that forever. I’ll be a Duke supporter until the day I die. That’s definitely something I’ll carry with me.