5 Things You Never Learned (or Forgot!) About Sir Isaac Newton 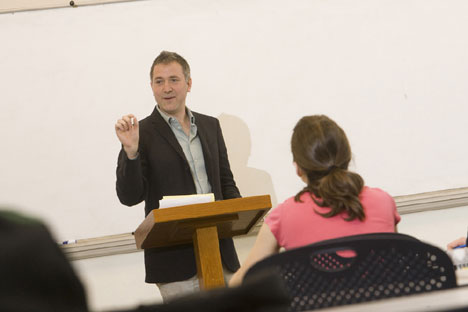 Janiak is teaching the course, “How Did Isaac Newton Change History?” at Duke Forward in London on June 22. The London gathering is the last of an extraordinary series of events this spring celebrating the launch of the Duke Forward campaign and what it means for the university’s future. The campaign will hit the road again in the fall beginning in Chicago on November 2. A theme leader of the recently announced Bass Connections program, Janiak also chairs its Faculty Advisory Council. He has been director of the Graduate Program in History and Philosophy of Science, Technology, and Medicine since 2007.

1. Newton, considered one of the most influential scientists of all time, was not a scientist. There was no such thing as a scientist in the 17th century. The term was first used in 1834 to describe a woman named Mary Somerville who was doing “science” at Oxford (that’s right, the first scientist in history was a woman!). Newton was a natural philosopher – one who pondered and generated philosophical ideas but also studied the natural world.

2. Newton’s interest in God was central to his work as a natural philosopher. Newton was a very religious person, and considered his investigations of the natural world to be completely compatible with his faith.

3. Newton was deeply interested in alchemy. Like scientists, chemists also did not exist in the 1650s. But, there were alchemists who experimented with metallurgy and other forms of early chemistry. Newton’s interest in alchemy helped him conceive of a new kind of natural philosophy that would use experiments to answer questions about the natural world.

4. Newton stressed that math should be part of the equation. Before Newton, natural philosophers did not use mathematics to reach conclusions. He founded modern physics by focusing on questions that could be answered with mathematics and empirical evidence.

5. Newton was a living example of the value of learning outside the classroom. The philosophies and ideas that had the greatest influence on Newton’s life – René Descartes’ findings and geometry, for example – were not taught at Cambridge in the 17th century. He found these on his own. Newton discovered the laws of motion by reading in his spare time!

Learn more about ways the campaign will support faculty excellence inside and outside the classroom at dukeforward.duke.edu.