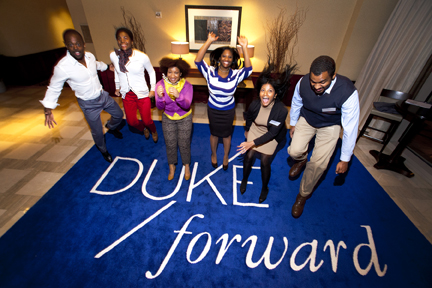 More than 400 Duke University alumni, parents and friends gathered in Atlanta on Saturday for an afternoon and evening of community, intellectual engagement and celebration as Duke Forward kicked off a series of “On the Road” events. Other stops this spring include San Francisco, New York, Washington, D.C., and London.

The program included a keynote address from behavioral economist Dan Ariely, a course on Isaac Newton taught by philosophy Professor Andrew Janiak, and discussions on the state of college athletics and water-related issues with contributions from students, faculty, and other experts from various disciplines.

In the evening program, President Richard Brodhead described the ways that Duke Forward, the university’s recently launched $3.25 billion fundraising campaign, would help shape Duke’s future, and he announced that the university had raised $1.5 billion toward its goal. He also interviewed Nobel laureate Robert Lefkowitz on stage, asking the James B. Duke Professor of Medicine to describe his visit to Stockholm to accept the prize, to discuss the specifics of his research and to talk about why he has stayed at Duke for 40 years.

Lefkowitz shared the Nobel Prize in Chemistry with Brian Kobilka, a former post-doctoral fellow in his lab, for their discovery of how a class of cell-surface receptors conveys chemical messages from outside the membrane into the cell’s interior. Their breakthroughs gave drug makers new ways to target disease.

The evening concluded with a “strolling supper” during which attendees mingled with speakers they heard from earlier in the day.

“It was fantastic to hear [Dan Ariely and Robert Lefkowitz] talk about their areas of study, their discoveries—and they did it in such a wonderful, conversational way,” said Jennifer Moore Rosenblath ’92 . “It made me nostalgic about being back at Duke and being back at class.”

Faculty and student speakers said it was rewarding and inspiring to them to interact with such an engaged audience. “People asked really wonderful, thoughtful questions,” Janiak, Creed C. Black Associate Professor of Philosophy, said about the more than 150 attendees who attended two sessions of “How Did Isaac Newton Change History?”

The next “On the Road” event is on March 23 in San Francisco.

A few highlights of Duke Forward in Atlanta:

– Lefkowitz on traveling to Stockholm to receive the Nobel Prize: “Stockholm was a fairy tale, complete with lots of snow, a king, a queen, and two lovely princesses whom I sat between at dinner,” he said. He also said he liked to keep his success rate “around a third or lower.”

“Failure is something you have to really embrace,” he said.

– “Classrooms without Walls,” a panel led by Steven Nowicki, Dean and Vice Provost of Undergraduate Education, made up of students who have participated in some of Duke’s most innovative programs—DukeEngage, the Start-Up Challenge, Winter Forum, DukeImmerse, and the Financial Education Partnership.

“I had a difficult time understanding how Duke had changed” after I graduated, said Matt Simmons ’03, one of about 30 people who attended the session. “But this put it into perspective.” His wife, Emily Simmons ’03, said the talk made it easier to understand and appreciate “what kind of programs Duke Forward funds.”

– A Q&A session with Ariely, James B. Duke Professor of Behavioral Economics, that touched on ego depletion (the state in which we don’t have any more energy to make good decisions), Lance Armstrong on Oprah (“I think it was an unbelievable PR nightmare … but I think he was truthful”), and the biases of doctors in decision-making.