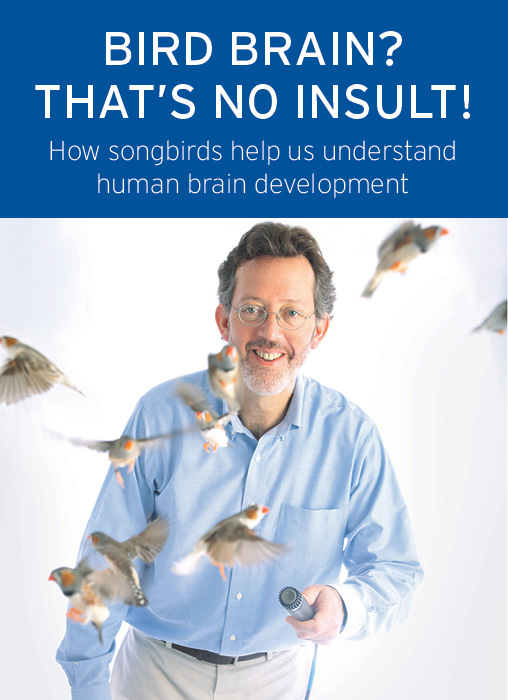 Over 30 years ago, music sparked Duke neurobiologist Richard Mooney’s interest in studying the brain’s auditory system. Fresh out of college, Mooney had moved to San Francisco to pursue his interest in classical guitar. While attending the San Francisco Conservatory of Music, Mooney, who studied biology as an undergraduate, became fascinated with how the brain learns music. What happened next was what Mooney calls “an amazing confluence of events.”

He walked into the UCSF Medical Center, looked up who was researching auditory processing, and managed to get a part-time job as a technician in James Hudspeth’s sensory neuroscience lab there. He went on to study the auditory systems of songbirds at Caltech before coming to Duke in 1994.

Mooney, along with his colleagues from the Duke Institute for Brain Sciences, will appear on the “Creative Culture & Your Brain” panel discussion at Duke Forward in New York on April 26. The New York gathering is part of a special series of events for Duke supporters to celebrate the university’s extraordinary past and exciting future following the launch of the university-wide Duke Forward fundraising campaign.

Here are some of the things Mooney has learned about what birds can teach us about human speech and language development.

Songbirds and humans are imitative learners and transmit their vocal repertoires from one generation to the next.
Young birds also need to be able to listen to their own song to determine when it matches the song of their tutor.  After intensive vocal rehearsal, the young bird learns to sing a close copy of the tutor’s song.  A similar process of imitative learning occurs in humans when they learn how to speak. Imitation is also the foundation for a lot of the things humans learn how to do, such as artistic and athletic performances, when people usually gain mastery in part by imitating someone else who has already achieved mastery.

Bird song is not just like human speech in a metaphorical sense, but in a very exact biological sense.
There are remarkable similarities between human and bird brain organization and function, but brain structures for singing and learning are well differentiated and stand out in the brains of songbirds. This makes it easier for researchers in Mooney’s lab to use sensitive microscopes and other devices to pinpoint precisely where, when, what, and how the brain learns song. What they have learned about songbird brain mechanisms can be especially useful for understanding normal brain mechanisms in humans, which are nearly impossible to study at the level of individual nerve cells and synapses.  Instead, most of what researchers know about normal brain function comes from studying a specimen damaged by a genetic abnormality or trauma such as a stroke or brain injury.

Learning changes brain structure.
The experience of hearing an adult bird’s song rapidly changes the physical makeup of a young bird’s brain, triggering a whole sequence of development. In his laboratory, Mooney and his colleagues have been able to watch how learning song literally crystalizes brain structure, strengthening the synapses in the auditory system. Though researchers still aren’t clear if the same process happens in human brains, Mooney’s research is an important piece of the puzzle to understanding how children learn and develop language.

Early learning experiences are critical for normal brain function.
Songbird and human brains both require specific kinds of experiences within specific windows in order to develop properly. For example, if a child does not have the ability to hear, he or she needs some kind of communicative interaction, such as sign language, in order to trigger further brain development. The absence of that experience can have devastating consequences, disrupting normal brain development, function, and communicative ability for years to come. A songbird that cannot properly replicate its species’ song, for example, will not be able to reproduce.