Getting By With a Little Help From Their Friends: 5 Things Monkeys Are Teaching us About Friendship 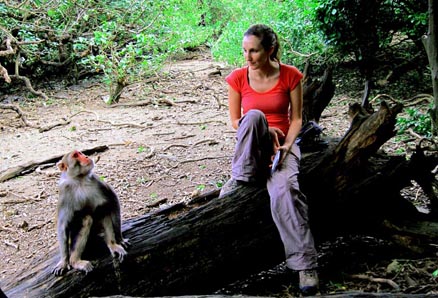 Friendship may be just as important to monkeys as it is to humans. For the past seven years, Lauren Brent, a postdoctoral associate at Duke University’s Center for Cognitive Neuroscience, has been studying friendship, social networks, and cooperation among rhesus macaques in Cayo Santiago, Puerto Rico. Here are five things her research is revealing about the nature—and importance—of friendship among mammals.

1. Friendship is deeply rooted in our evolutionary history. Friendship is not a learned behavior or cultural fabrication. It’s part of our foundation. Primates—and other mammals, including dolphins and hyenas—have friendships, suggesting that our common ancestor more likely than not had friends too.

2. Friends can help you live a longer, healthier life. When comparing individual monkeys, the ones with the strongest friendships live the longest and have the most babies, indicating that friendship helps both monkeys and humans survive and reproduce. Monkeys who are more connected and have more “hangout buddies” in their social networks have lower average stress levels than monkeys that are more socially isolated. Strong social bonds also help rhesus macaques cope with challenges in their environment and social groups that they can’t deal with as individuals, such as predators and competition for food.

3. Good hygiene is important for friendships. Monkeys express friendship by grooming each other. Much like you might ask a friend to help you put sunscreen on your back, monkeys ask their friends to help them clean hard to reach places. While monkey grooming is built upon a very basic hygienic purpose, this exchange establishes an understanding between two friends that they can count on each other.

4. Sociability might be inherited. Though a rhesus macaque’s social hierarchy is determined at birth, social network data suggests that some monkeys are born more socially inclined than others. These more “popular” monkeys invest a lot of time in grooming their friends.

5. Friendship is a long-term investment. Monkeys, like humans, have long-term relationships with their friends. Rhesus macaques have sustained relationships that are positive in nature with the same individuals or groups over a long period of time.

To learn more about Dr. Brent’s research, you can view her TED talk on The Discovery of Friendships in Animals.