One alum’s journey of 60,000 steps to raise money for Duke 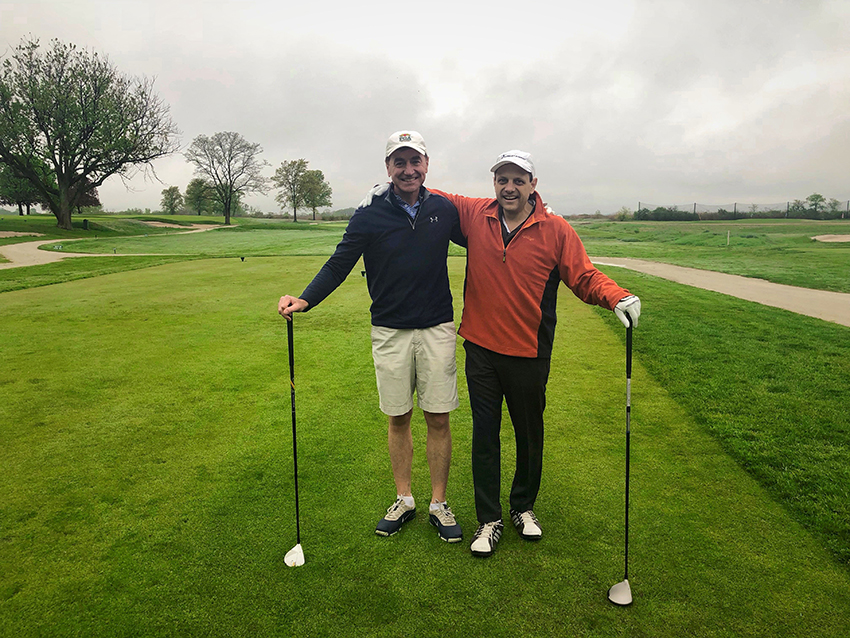 When Robert Santangelo ’92 decided to raise money for Duke, he figured a journey of 60,000 steps was par for the course. The golf course, that is.

He signed up for the 100 Hole Hike, a national network of golf marathons where participants walk 100 or more holes of golf in a single day to inspire friends and family to support a cause of the golfers’ choice. Santangelo’s was the Santangelo Family Scholarship Fund for Duke undergraduates, which he established in 2016.

“At the time, I realized that I was not a kid and not struggling any more to pay off loans, buy a home, have savings. I realized I had been fortunate and it was time to start giving back,” said Santangelo, a Credit Suisse Group AG banker who graduated with a degree in economics. “Golf is something I’ve done my whole life. Combining that in a creative way with a fundraiser was a great fit for me.”

So at 4:30 a.m. on May 14, Santangelo headed to the Inwood Country Club, a historical course founded in 1901 on the shores of the Atlantic Ocean, about 20 miles from Manhattan. Six other teams were playing for charity that day. The damp, 50-degree morning gave way to a sunny, 70-degree afternoon. It was perfect weather for Santangelo’s 100-hole, 30-mile challenge, which he and his friend, Trevor Ganshaw, completed to a tee in a little over 13 hours and 60,000 steps (with a few refreshment breaks and outfit changes in between).

“The first three rounds and most of the fourth were pretty easy. The second half of the fourth and the fifth felt kind of long,” he said with a chuckle. “If I hadn’t been doing it for something that I thought was a good cause, I probably would’ve decided I’d had enough at that point. But at the last nine holes, I knew I was close to my goal, and it was easy to see it through.”

Santangelo, who grew up on Long Island, the son of a policeman and a school teacher, believes strongly that every qualified student should be able to attend Duke without worrying about money.

“We were not poor at all but private college in today’s day and age would’ve been something else,” he said. “The cost of education is a big, big deal. The separation of wealth in this country is a real underlying challenge and I think keeping open all avenues of advancement for all income levels is really important.”

Duke, he said, “played a big part in my opportunity set and formative years … and I want kids from similar families like mine to have the same opportunities I did. The scholarship fund made sense to me because it was a very direct and quantifiable benefit in perpetuity.”

The only downside to Santangelo’s 100 Hole Hike were a few small blisters — and three-putting from 18 inches to make a bogey. The upside? $40,000 raised.

“Overall, the event was a great success,” he wrote in an email the next day to the people who had supported his mission. “Having played nearly six rounds in a day, I would gladly return next week for another 18.”