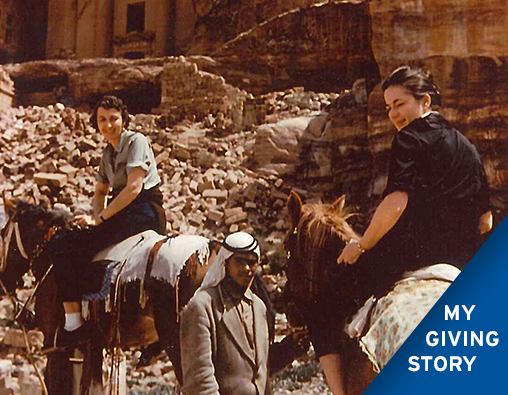 Duke was a very different university when Mary Robinson ’49 arrived from Ashtabula, Ohio.

It was September 1945, just weeks after World War II ended. Women students were housed on East Campus, men on West. Women were not allowed to have cars—or men in their classes for the first two years. The Giles Residence Hall house counselor, known as “Mama T,” explained the rules of Southern etiquette to Robinson and other new residents in house meetings. Outside, the workers pulling ivy from the dormitory’s brick walls chatted in German; they were prisoners of war from a nearby army camp.

Robinson remembers being inspired by the welcome address of Alice Mary Baldwin, Dean of the Woman’s College and the first woman to receive tenure at Duke. Baldwin and other Duke women administrators had a lifelong influence on Robinson as she pursued leadership positions, from chairman of the Duke Student Judicial Board to her accomplished, wide-ranging career in higher education.

A passion for travel played a major role in her life and career, too. After graduating, she headed for Germany, where she served more than two years as a civilian recreation specialist for the U.S. Army. From there, she visited the capitals of Europe, returning to the United States with trunks full of souvenirs and slides. But she was soon to embark on a journey even farther from home.

After gaining administrative experience at Duke and other universities, Robinson was named Dean of Women at Eastern Washington University. A year later, she was offered the same title nearly 7,000 miles away at the American University of Beirut. She recalls her time in Lebanon as “nine wonderful years, making new friends, seeing strange lands.”

In 1969, she returned from the Middle East to the far west. As Dean of Women and Vice Provost for Academic Affairs at Western Washington University, she became involved in affirmative action programs, working to help women and minority employees receive equitable salaries and opportunities.

Throughout her life, Mary upheld a longstanding Robinson family tradition—volunteerism. In high school and at Duke, she was an active volunteer for the Girl Scouts. Since her days in Beirut, she has served the YWCA as a president. More recently, she has worked as a hospice volunteer and visitor to chapel members.

Robinson believes in giving financial support as well as time and effort. In addition to including Duke in her will, she has established two “life income gifts”: a charitable gift annuity and a gift to a pooled income fund. The remainder of the gift annuity will be directed to the Faith Council Fund at Duke Chapel while the pooled income fund will be added to the Nancy Hanks Endowment for the Arts, a fund created to strengthen the arts at Duke. Both gifts will provide an income to Robinson for life and will ultimately support her designated areas at Duke.

“Philanthropy is important,” says Robinson, ”as it reflects one’s interests and gives the opportunity to see those interests continued through the years. It also may encourage others to give.”

Asked about her hopes for Duke, she cites two: “First that it will continue to admit qualified students regardless of ability to pay, and second, that it will remain open to students of varied faiths and personal persuasions.”

How would you describe your experience at Duke and your hopes for the university?

My Duke experience was enriching and is ever giving. Coming from the North, I was happy to meet students from other parts of the country and the world. In the Woman’s College, I saw women administrators as role models. I was fortunate to know Deans Baldwin, Huckabee, Persons, and Mary Grace Wilson.

My involvement in the “Y,” Duke student government, and intramural sports helped me develop leadership skills. A few years after graduation, I returned for three years as a house counselor in Jarvis Residence Hall.

Why did you decide to establish a charitable gift annuity to benefit Duke Chapel?

The decision was a happy one. It brought back fond memories of my student experience. Sunday morning was a special time for me, as I enjoyed going to church in the beautiful chapel with its stained glass windows and magnificent organs.

Our attire in those days included hats, gloves, heels, and hose. I recall weekly attendance, classmates singing in the choir, and Dr. James Cleland, the chapel preacher who came to Duke the same year as my class. He and we always considered him part of the Class of 1949.

What led you to support the Nancy Hanks Endowment for the Arts?

Nancy and I were involved in Duke student government together. A lifelong friend, she visited me when I was working in Beirut. We rode horseback into Petra, Jordan, a wonder of the world. President Nixon appointed Nancy as Chairman of the National Endowment for the Arts. After she died, the historic Old Post Office building in Washington, D.C., was renamed the Nancy Hanks Center to honor her.

Mary Robinson ’49 and Nancy Hanks ’49 are pictured together riding horseback while in Petra, Jordan.