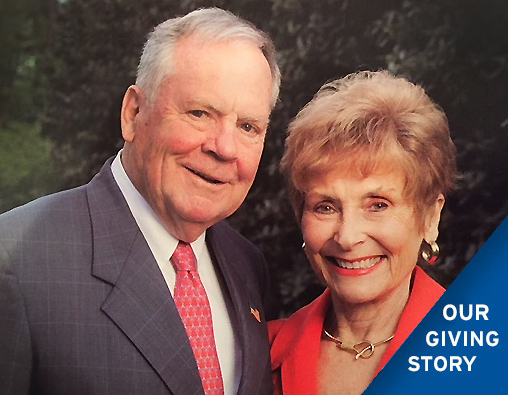 The first house calls James R. “Jim” Urbaniak M.D.’62 made as a doctor were for Mary and Eddie Cameron. The last house calls he made were for Tom Butters. For more than half a century, Jim and his wife, Martha “Muff” Shawger Urbaniak B.S.N.’67, have been devoted to Duke blue.

For those not familiar with Eddie Cameron and Tom Butters, they instilled many guiding principles at Duke Athletics that serve as the bedrock for the high levels of success its programs still enjoy today. With Jim’s medical career bookended by his exceptional service to these families, he and Muff are very much entwined in the legacy of Duke sports, in particular its football program.

“When I played football, we didn’t win all of the games – we lost some,” said Jim. “So it’s not only the development of relationships, it’s how to survive and succeed under adversity, which is a great teaching lesson.”

After graduation, Jim’s connections at Kentucky led him to Duke, with Drs. Lenox Baker and Frank Bassett, two pillars of the Duke orthopaedic community, encouraging Jim to attend Duke medical school. In Bassett’s case, he had also played football at UK under the tutelage of famed coach Paul “Bear” Bryant.

In residency training at Duke, Jim served as a team physician and traveled with the team. He gained firsthand experience learning to care for the whole health of the individual as he grew to know the injured athletes as friends. The lessons Jim learned as an athlete, and later caring for athletes, followed him throughout his legendary orthopaedic surgery career at Duke.

For Muff, who celebrated her 50th Duke class reunion just last year, her connection to Duke Athletics came as an undergraduate student in the Duke University School of Nursing. While training to be a nurse, Muff found that Duke football and basketball games were the big social events to attend on campus. It wasn’t long into her freshman year that she quickly fell in love with and began following both teams.

But from the tremendous nursing education she received at Duke, caring for and helping others has stuck with her most. Those values guided her during her storied career at Duke University Hospital and as an instructor at the School of Nursing, as well as in the Durham community helping to develop mental health programs for children, which she found to be deeply rewarding work.

Looking back, many of the best friends Jim and Muff made were former Duke student-athletes, assistants and coaches – or simply fans of the Blue Devils. Talking about the inspiration for their planned gift, Jim said much of it lies in the relationships created and memories formed. “We feel very strongly about Duke football. It’s an investment in making this great university even greater,” Jim said.

To the Urbaniaks, designating a charitable IRA rollover to benefit Duke Athletics made perfect sense. Giving the next generation of student-athletes who may not have the financial ability the opportunity to attend Duke is the legacy the Urbaniaks hope to leave to the university that has meant so much to them.

“Duke is our passion, really, and athletics are, too,” said Muff. “We raised our children going to Duke Athletics events. It was a family affair. And now we feel fortunate that we can leave this legacy.”

The Urbaniak’s impact at Duke is visible in every part of the community they compassionately helped build over the years.

What was your introduction to Duke football?

Jim: In 1959, when I came to Duke, I wanted to go see Tennessee play because they were the big rival at Kentucky when I was there. The Duke coaches told me that if I would scout for them, they would get me tickets down in the front of Kenan Stadium to watch the Tennessee-Carolina game. They wanted me to watch when the fullback cheated up some because they thought Tennessee was going to run a draw play. They also wanted me to get the snap count, the cadence.

At the game, whenever Carolina ran a draw play, I was supposed to be watching the fullback. But I was eating popcorn and missed those plays. Then I took notes for the game, but it rained and melted all my notes away. Seriously, this is a true story. (Laughs)

As soon as the game was over, I wanted to salvage something. I jumped over the wall and ran down on the field. I knew some of the Tennessee players because I had played against them for three years, so I wanted to know if they could give me the snap count. Believe it or not, this was only one minute after the game was over and none of the interior linemen could remember the count.

So I went back and gave my report to the Duke coaches, such as it was. And then Duke played Carolina on Thanksgiving Day in 1959; they beat us 50 to nothing. I had the shortest scouting career in the history of NCAA football.

But it did nothing to diminish my relationships with Duke Athletics. It was only the beginning.

What does a successful student-athlete look like to you, someone who is a champion both on and off the field?

Muff: Someone who comes to mind is Georgia Schweitzer Beasley ’01, M.D.’08, M.H.S.’12, who played on the Duke women’s basketball team but really wanted to go into medicine. She did play a few years with the WNBA, but she wanted to be a doctor.

So she was mentored by doctors at Duke; she went to medical school here, and she finished her residency. Now, she’s back at Duke as a surgical oncologist. She’s been an incredible role model for athletes.

Jim: Our orthopaedic residents at Duke who have participated in team sports are some of our finest residents. They’ve shown the ability to overcome adversity, concentrate, persevere and work hard. They are tremendous role models for young people today.

What does your gift to Duke Athletics and Nursing mean to you?

Jim: We believe in charitable giving. We’d love it to be a lot more we could leave. We feel it’s an investment in the whole future of Duke Athletics, Duke School of Nursing, Duke students, student-athletes, the professors, everything. That’s exactly what it feels like.

We feel like we may be giving enough to make some difference. It’s a wonderful feeling.

Muff: We’ve always had a will in which everything was left to our children and a few charities. But after careful reconsideration, we decided we’d rather be able to cut back on some of the charities in our will and fulfill those commitments on pledges while we’re living. Then we wanted to be able to leave everything except what is going to our children in some way to Duke University.