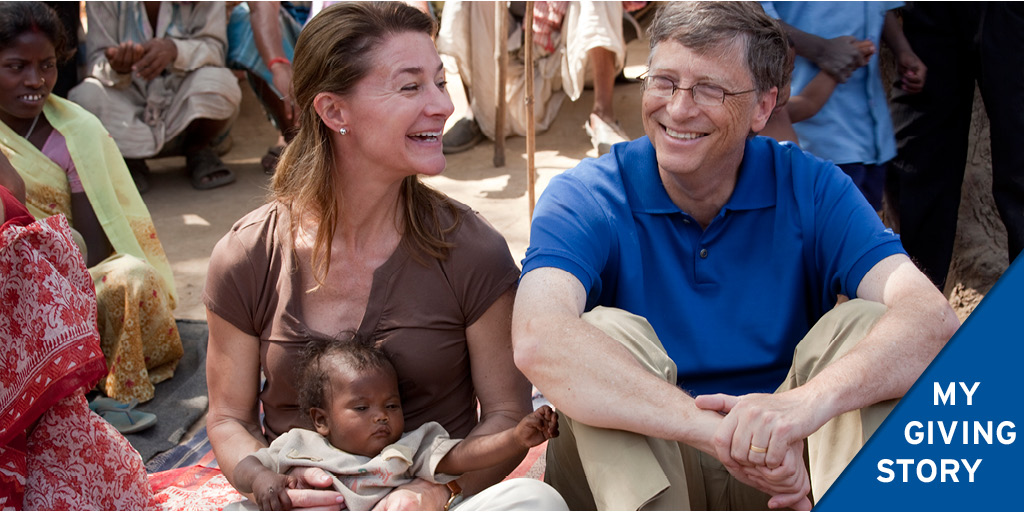 Connections with people—profound and often unexpected—have made all the difference in the world to Melinda Gates.

They defined her time as a student at Duke and have shaped her path to becoming one of the world’s most influential philanthropists. She and her husband lead The Bill & Melinda Gates Foundation, which operates on one simple belief: All lives have equal value.

That guiding principle is distilled from the couple’s powerful moments with people living in impoverished communities.

In her 2013 commencement speech at Duke, Melinda Gates talked about spending a day with a family in a village in the Himalayan foothills—and being struck by the fact that the aluminum chairs they were sitting in were the very same ones she had in her yard when she was a girl in Dallas, Texas. The similarity of something as simple as a chair, juxtaposed against the very different life circumstances people face just because of the random luck of where they are born, made a big impression.

That theme of connection, of similarities and differences, keeps coming up for her.

When Gates met with prostitutes in India, they told her about the stigma of being sex workers—about how no one seems to care if they live or die. But they also had a blast linking arms together and posing for photos.

Everywhere she goes, Gates says she sees people driven by the universal desire to make their life better—and their children’s lives better. They are everyday heroes fighting against serious challenges to build the future. And this is a project that every human being is engaged in together.

“Deep human connection is … not a means to an end. It is the end—the purpose and the result of a meaningful life,” Gates told more than 5,000 graduating Duke students in her commencement speech.

Gates, who earned her bachelor’s degree in computer science and economics in 1986 and her master’s degree in business administration at The Fuqua School of Business a year later, also told the students that “no matter how much time passes … I always feel connected to Duke.”

In July, the Bill & Melinda Gates Foundation gave a $20 million grant to help the Duke Global Health Institute (DGHI) educate a new generation of leaders and experts, and build research capacity around the world to address some of the critical global health challenges she and her husband have witnessed first-hand.

The grant provides $10 million in endowment support to sustain the strategic growth of DGHI. The other $10 million will support a challenge that will match one dollar for every dollar given, making the total impact of the grant $30 million.

Over the years, the foundation has provided key support to Duke. In 2002, it gave a $35 million gift for the French Family Science Center. The 280,000-square-foot building is home to state-of-the-art research laboratories for chemistry and biology is named for Melinda Gates’ family.

In 2007, the foundation joined with The Duke Endowment to establish a $30 million endowment to launch DukeEngage, a summer civic engagement program that pairs students with American and foreign nonprofits or non-government organizations. It has become one of the university’s signature programs. Also in 2007, the foundation donated $10 million to Duke for financial aid to undergraduates and business school students.

What inspired you to give the grant, and why did you choose to focus on the Duke Global Health Institute?

I loved my time at Duke, and ever since I graduated, I’ve stayed in touch. Every time I visit or come in contact with students, I’m blown away by how smart, engaged, and energetic they are, and I want to do what I can to help them achieve great things.

The Duke Global Health Institute is a natural fit. Bill and I started our foundation because we wanted to fight inequity, and global health is one realm where inequities stand out. If smart young people start focusing on health inequities, I am confident the gaps between rich and poor around the world will get narrower very quickly.

How did your time at Duke develop and shape you as a person? Is there something you took away from your education here that has stood you in good stead through the years, either personally or professionally?

I was one of the few female computer science majors, back at a time when nobody was talking about women in STEM fields—but I never felt out of place at Duke. There was just no stigma attached to what I was doing, either inside or outside the department.

I learned to work with male colleagues with many different styles and found I really enjoyed managing teams. As a result, I was confident enough to go on to become one of the few female leaders at Microsoft in its early days.

During my time at Duke I learned how it felt to be supported as a young woman with big ideas, and I want every woman—everywhere—to be able to feel that. When they do, there’s no telling what impact they’ll have on the world.

Why is giving important at a place like Duke?

Duke accomplishes so much with the money it’s given. When you’re a student here, you are surrounded not just by great faculty and great programs, but also by great classmates who push you to do more than you thought you could.

I got a letter a couple months ago from a mother whose daughter was named a Duke University Scholar last year. The mother talked about the very difficult challenges her family faced, and she described the sacrifices she made so that her daughter could grow into the kind, caring, sensitive woman she knew she could be.

Now that the University Scholars Program was supporting and encouraging her daughter, this woman said that she could focus on getting out of her current situation and finding a career and, she hoped, happiness.

Do you have any advice for current students?

When I was at Duke, my peers and I weren’t very aware of the rest of the world. I knew there was a famine in Ethiopia, for example, but I thought it was a far-away problem that didn’t really concern me.

I wish I’d understood earlier how much there is to be gained from seeing the world in different ways. The time I’ve spent traveling and meeting people in countries around the world has been some of the most rewarding of my life.

So I’d encourage students to seek experiences outside what they’re used to and outside their comfort zones. That’s why I’ve been so involved with DukeEngage. The more you learn about different kinds of people and situations, the more you’ll feel compelled to do something, and the richer your own life will be.

Just that I can’t wait to see what Duke and the Global Health Institute do next!

Duke University has received a $1.825 million gift from Husein Cumber P.P.S.’97 and his wife LeAnna Cumber, the majority of which will establish a full professorship in national security at the Sanford School of Public Policy. The gift includes $1.75 million for the professorship through The Duke Endowment Sanford Faculty Challenge and support for the […]